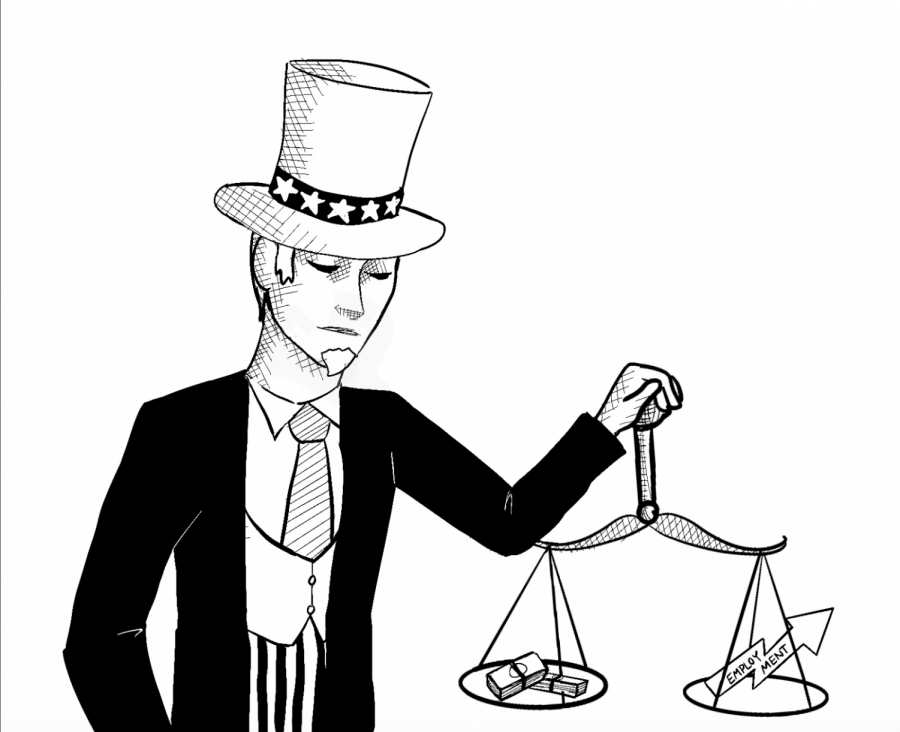 Stimulus checks have been a topic of great debate throughout the past year, more prevalent than ever with the pandemic. It seems as if there is no one consensus to be reached, and no easy solution to this problem. Two students debate the efficiency of stimulus checks to answer the question, have stimulus checks benefited the country or ultimately caused more harm than good?

Many people were put out of jobs and were unable to support themselves nor their families during the COVID-19 pandemic. By May of 2020, 9 million people were unemployed, all having to rely on others for their survival.

Many went without jobs for months at a time with no source of income apart from stimulus packages. Supporting dependents was a huge part of why life got so hard when COVID began. After getting laid off, it is hard enough to support yourself, let alone support children, companions, and other dependents.

Payments sent out by the government steadily helped these unfortunate people get on their feet and moving forward. Every life affected by COVID had been made slightly better by the stimulus checks. The burden laid on their shoulders of not having food, water, or a place to stay was helped and set further aside.

Being left to rely on relatives does not work out for everyone as many relatives may not have the means, space, or time to help their loved ones. Making the unemployment problem more individual has helped everyone by containing the burden from other’s lives and fixing it with little intervention from others.

Many were under pressure to help their families, but that put their lives on hold to help others. When the stimulus checks were deployed it helped the people and families in need take care of their problems on their own, and less dependent on their loved ones.

An economic boost came as a result of some people finding themselves with more spending money after deployment of the checks. An article by the Peter G. Peterson Foundation says the economic output boosted 0.6%, which in hindsight is a small number. In a 22 trillion dollar economy, however, that is a lot of jobs and money put back into the pockets of Americans.

As a part of the initial stimulus package in March 2020, 700 billion dollars were put into forgivable loans for businesses, according to the U.S. Chamber of Commerce. These are known as PPP loans, and are meant to revitalize a business. Existing and past jobs were salvaged with these loans as they were large enough to rehire laid off employees, further lessening the overwhelming unemployment in the U.S. as COVID struck.

Keeping existing workers in said businesses was also a big piece of the PPP loan ability. Allowing workers to continue their lives by staying gainfully employed not only helped with their income, but also helped restore their sense of normalcy and dignity. In small businesses even one worker could mean the difference between a productive business or a business that has to close at two in the afternoon because there is not enough help to keep the business open.

The stimulus package also included COBRA subsidy changes. Laid off workers were granted 18 months of healthcare coverage from their former employers. While the people still had to pay the majority of the cost of the plan, their healthcare plan could remain in force and not be revoked when they lost their jobs.

All of these benefits helped bring much needed help and comfort in a time of great uncertainty.  Lives were made a little bit easier and better than they would have been during this pandemic. People all across the nation had been taken out of jobs, left to take care of their kids who would otherwise be in daycare or school, or stranded with no way to pay off debts or buy vital goods to live.

The stimulus packages passed by congress changed the grim outlook for the future and saved families by giving them the means to feed themselves, re-enter the workforce, and help stimulate the economy – outcomes which benefit everyone.

Money granted to businesses helped lower the unemployment rate from 14% at the peak of the pandemic to 4.8% after businesses were helped to their feet by the government. The stimulus packages helped and stabilized the economy and people of the United States.

Without these stimulus packages progress would not have come forwards from the heavily distressed and uncomfortable U.S. citizens.

Stimulus checks have affected each and every one of us, whether it be through stores closing in town due to understaffing or a direct family member collecting one. There is a huge amount of the population in the US that recently became unemployed due to the COVID-19 pandemic.

Stimulus checks are given out to taxpayers in the US, many of whom rely on them having lost their job, or had a significant loss of income due to the COVID-19 virus. The stimulus checks are an attempt to generate more money to either be injected into the economy or to generate the basic needs of those who are receiving no monthly salary.

The stimulus checks are part of a larger stimulus package designed to support the economy. The packages are supposed to boost spending of US citizens, and indirectly bring employment rates up. Recently, though, employment rates have plummeted due to the stimulus checks, leading to a significant recession in spending and the significant economic decline of our country as a whole.

Though there’s certain upsides to the financial aid of the citizens throughout our country, there’s definitely more monumental downsides to it.

In an article done by CBS News Detroit it’s mentioned that due to the stimulus checks, the Congressional Budget Office is expecting the debt of the federal government is going to surpass the size of the entire economy, or almost 21 trillion dollars by the end of this year.

In an article done by NBC News, it’s stated that the COVID-19 relief bill that president Joe Biden put into effect will eventually end up costing up to 3 trillion dollars. It includes more stimulus checks, more unemployment benefits and more aid to cities and states, but there’s also a child tax credit, child and dependent care tax credit and an earned income tax credit, which weren’t accounted for in the 2 trillion dollar cost estimate.

There are many businesses, aswell, through the US that are understaffed due to the lack of employment that is a result of the stimulus checks. People are less likely to work for their wage or just slightly more or less than that when they could be earning the same money while doing nothing.

This wave of unemployment is spread throughout the whole country, and is even seen in our own town, with small businesses and storefronts closing early or not opening in the first place because they have such limited staff.

Article by the New York Times states, “Research by Ioana Marinescu, Daphné Skandalis and Daniel Zhao, for example, found that every 10 percent increase in the jobless benefits a person received corresponded to a 3 percent decline in the number of jobs applied to.” It makes sense, in a way, that people making just as much or even more money than they were previously would lessen the risk of exposing themselves to the COVID-19 virus and stay home.

A similar idea is stated in an article by The Independent Florida Alligator, where many of the people surveyed stated that they didn’t have much or any desire to work in restaurant business, and a lot of them are having their needs fulfilled by just the stimulus checks, causing a lot of people to leave their former jobs.

The US Department of Labor’s informational article on stimulus checks states, “The CARES Act gives states the option of extending unemployment compensation to independent contractors and other workers who are ordinarily ineligible for unemployment benefits.”

The COVID-19 pandemic is providing more money flowing to the people in the US than there would have been if there wasn’t a worldwide pandemic, and it’s having a great effect on the way the money is being used.

The stimulus checks are being used by unemployed people as their basic means of life, therefore limiting the flow of money into the businesses that formerly had a steady flow of revenue. Because of this, there are greatly reduced sales resulting in less workers because of less pay, which ultimately causes a lot of small businesses to close and shut down.

Though this might just seem hypothetical we see it in everyday life, too. The unemployment rates in our town, which formerly weren’t very high at all, are rising. There have been several small business closings in the Bernardsville Town Center, and nothing has reopened in their place.

Such as the Starbucks in town, a popular attraction for early morning commuters and people working from home, as well as a popular hangout spot for middle and high schoolers. They’ve recently started closing their location at 2 pm, before the end of the school day, greatly limiting their sales from all students which is a large portion of their profit. They’ve been very honest about their early closings, and said multiple times that it’s been due to staffing issues, and having a shortage in employees.

Overall, the stimulus checks have been a detriment to our society. They have caused unemployment throughout the country as a whole, but also in our small town of Bernardsville. The disadvantages greatly outweigh the benefits.

The Crimson • Copyright 2021 • FLEX WordPress Theme by SNO • Log in