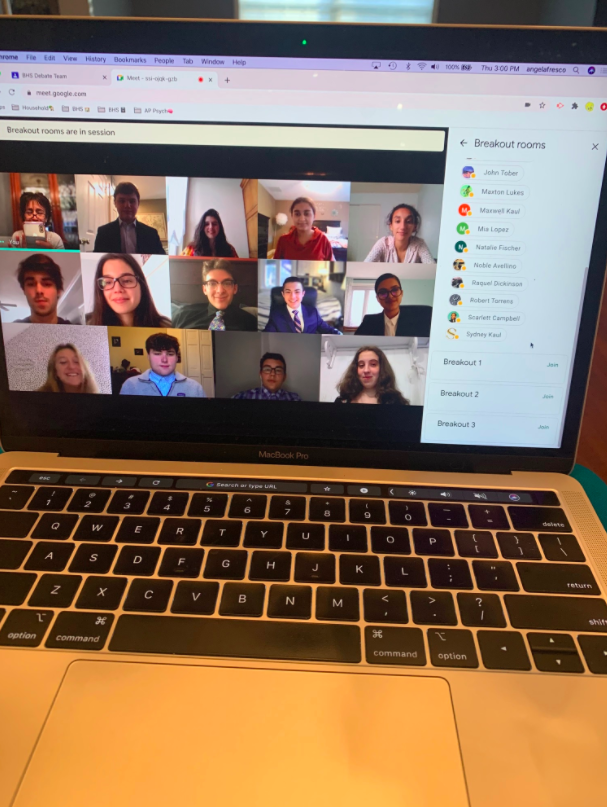 Great Debate: Should pandemic responses be centralized or decentralized?

Amidst a global pandemic, there has been much arguing and fighting revolving around the best solution for our country. One wrong decision and everyone faces the consequences. The BHS Debate Team recently had their first debate via Zoom on November 19, 2020 and discussed the issue at hand. The team debated which response, decentralized or centralized, would be more effective for the United States during the global pandemic. Each side included six students. The decentralized response was fought by Nobel Avellino, Arielle Rabinovich, Ashwin Barama, Max Kaul, Sydney Kaul, and Sarah Cirillo. The centralized response was defended by Scarlett Campbell, Roberto Torrens, Joel Dickinson, Raquel Dickinson, Maxton Lukes, and Natalie Fischer. The debate was carefully considered and judged by Anya Singh, Mia Lopez, and John Tober. The judges listened to both sides two minute long opening statements, followed by a forty minute back-and-forth discussion. This debate was informal and did not have a specific format that was followed. In the live debate, after much consideration, the two judges came to their decision; they awarded the decentralized response team as the winner. The judges concluded with a 2:1 decision in favor of the decentralized team. However, each reader is encouraged to make their own decision. Below are both teams opening statements and main points to aid you in your decision:

Responses should be centralized:

Good afternoon Judges. I would like to begin by addressing just how devastating Covid-19 and the global pandemic is. Approximately 1.34 million people have died from this horrifying virus and this number does not account for the people who are still suffering and struggling to survive. Today, my team and I will make it clear to you that centralized national responses to pandemics are more beneficial than decentralized responses. Our first contention describes how centralized leadership provides certain medical benefits during a public health crisis. Our second contention relates to the quick mobilization of resources. Finally, our last contention is the fact that there is no competition upon local government. By the end of this discussion, we will have made it clear to all of you observing today that centralized government is crucial in this depressing and chaotic time. Thank you.

Responses should be decentralized:

Hello judges, we are in front of you today to argue why decentralized governments in response to the COVID-19 virus are the superior and smarter solution to combat the virus. It is a much more fit approach than the centralized government in a democracy like America. America is a federal republic, which means the federal government is never meant to hold so much power over the people. They should not have the ability to determine such vital decisions for all of the people. States are very different and have their own unique needs and solutions depending on their environments. Just like schools have the ability to make their own decisions that work best for their specific school and students, states should have that ability. They should be viewed as separate from the country as a whole the way that schools are viewed separately from neighboring schools. It is the same exact situation, so why approach it with two different solutions? Give the people the power they deserve. With that said, all states need to be treated differently amidst a global pandemic. Finally, America was built on a federal republic where the people are given a valid voice in decision-making. Our country has always functioned well under this system and a global pandemic is not the time for unnecessary change. We have yet to see threatening problems with the way we work. If we change our ways now, a return to federal republicanism is not guaranteed. If we allow the government to possess such great power during such dire times, we are contradicting the way our country has always worked. Centralized government is not the best approach for the people and is only a plan for disaster. Thank you.

The decentralized team argued three main points as to why this was a better approach:

The Crimson • Copyright 2021 • FLEX WordPress Theme by SNO • Log in