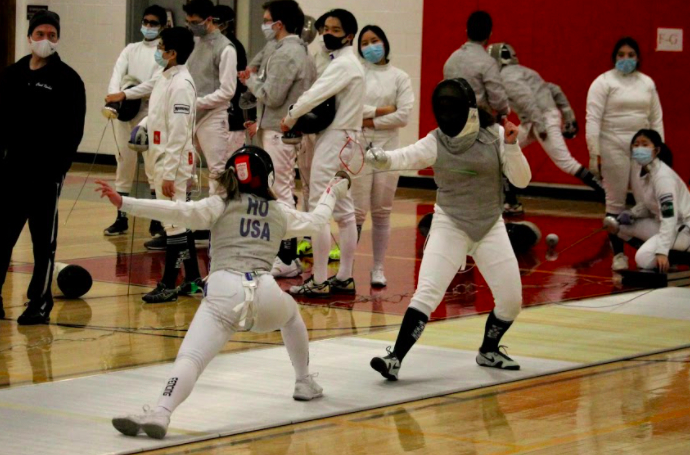 Brianna Ho, a freshman at BHS, began devoting her time to fencing almost 7 years ago. Her and her older brother Ryan began fencing at the same time, and it has been a big part of their lives ever since. Brianna’s hard work and dedication has always shown to pay off; Most recently, it was shown when she became the Nj.com Girls Fencer of the Year 2021. While Brianna has devoted most of her time fencing, it is not the only thing she spends time doing, she said, ¨Although I’ve dedicated everything to fencing, I also play tennis, piano, and am in the process of founding an Entrepreneurship Club!¨

All the time that Brianna has spent training and practicing has really paid off, she has ¨Won multiple tournaments in the past, but [she is]  most proud of getting gold at an SJCC (Super Junior and Cadet Circuit), and ninth in a Cadet National tournament.¨ Her most recent accomplishment is being the Nj.com girls fencer for the year of 2021. While she is unsure of how she was selected, something that may or may not have been a factor were her stats for the season, ¨This season, I went undefeated against all schools with a record of 30-0.¨

This year was Brianna’s first time fencing for BHS, and she said ¨Although I was quite nervous to go into the team as a freshman, the team was so welcoming and made it extremely easy to fit in. Everyone was eager to learn more about fencing, so it was a great experience to be able to mentor my peers. Since I’ve never been in a team before, this was a completely new experience. I’m proud to say that it was nothing short of great.¨ She also explained that her teammates and coaches were incredibly welcoming to her,  ¨Each and every one of my teammates are so welcoming, kind, and enthusiastic about fencing. Although it was a different season, they were all more than happy to fence together as a team. My coaches made things a lot easier for us — organizing and dedicating their time to the team. Coach Cherng, Coach Jared, and Coach Mrak were great mentors for everyone on the team, myself included!¨

While this year has been unlike any other, it did not stop Brianna or any other fencers at BHS from having a great season she explained that, ¨Apart from the difficulties of practicing and competing together amidst the pandemic, this year was such a great season for both myself and the team. Because we had less practices, everyone worked extra hard each time so that we could really step up our game for the meets. Everyone on the team got closer, including the coaches, and we’re excited to start the next season.¨

Before Brianna joined the fencing team at BHS, she fenced and still fences for a foil fencing club called, V Fencing Club. She explained that fencing there has made a huge impact on her fencing life, ¨My club is filled with high level competitive fencers, so being able to train with them really brings up the challenge. My coaches are great teachers and help me to grow as an athlete. Without V Fencing Club, I wouldn’t be the fencer I am today. For anyone looking to improve their fencing, I absolutely recommend this club (foil only).¨

Not only has Brianna won competitions and had some outstanding accomplishments, but fencing has also given her some amazing opportunities. She has been able to travel to, ¨Poland, Paris, and multiple parts of Italy.¨

Fencing has become a huge part of Brianna’s life and plans to keep it that way, she hopes that she will be able to continue fencing in college. In a final comment, she explained how becoming the Nj.com girls fencer of the year felt, ¨I was very excited and pleased to hear that I was chosen. This was only my first year, so it was an absolute honor to be able to hold such a name. This achievement was just one step closer to my ultimate goal as a fencer.¨