Seeing through the smokescreen: a closer look at the vaping epidemic 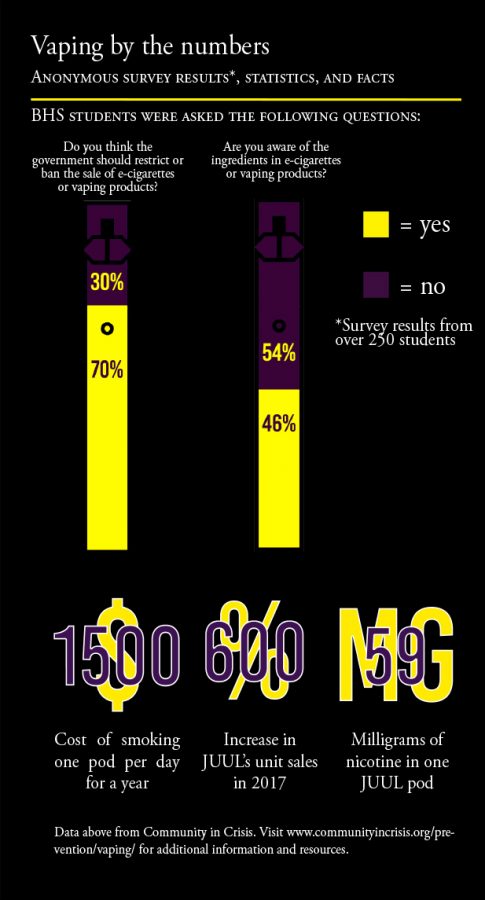 An eighth person in the United States has died in recent weeks after being rushed to the hospital with shortness of breath, nausea, and fatigue–all related to vaping. Hundreds more have been hospitalized with vaping-related respiratory illnesses. The Centers for Disease Control and Prevention (CDC), the U.S. Surgeon General, and healthcare providers across the nation have warned teens and adults alike about the dangers of vaping, yet the country still faces a growing epidemic.

According to the CDC, nicotine, heavy metals like nickel, tin, and lead, flavoring like diacetyl (which has been linked to serious lung disease), and cancer-causing chemicals can all be found in e-cigarette aerosol. Even e-cigarettes that are marketed as containing “zero percent nicotine” have been found to contain nicotine.

While the contents of e-cigarettes can be deadly, the lack of information about the technology can be just as dangerous. Many users are unaware of exactly what they are smoking and candy-like flavors and novel devices exacerbate the problem, according to medical professionals at Yale University. Teens across the nation are quickly becoming addicted.

A senior who wished to remain anonymous said, “It’s really stupid, but I started vaping at parties and then the next thing I knew, I had so many of my own [devices], and I finally realized it was messing up my life and decided to stop.”

Addiction and quitting is exactly what was discussed at a recent meeting of BHS’s Home and School Association. Heather Athanasiou of Community in Crisis, a local support organization, discussed the facts, figures, and fears concerning vaping. She explained the function and structure of vaping devices and how deeply the brain is affected by the smoke.

“The combination of propylene glycol, flavoring, nicotine, and heat gives off formaldehyde, an embalming chemical…The teenage brain is still growing and developing, making it incredibly susceptible to these chemicals,” said Athanasiou.

Simply put, it is much easier for a teenager to develop an addiction to vaping than an adult.

Another senior, who also wished to remain anonymous, said, “I just feel bad for people who are addicted and wish there was more we could do to help them.”

BHS administration and staff work to prevent substance abuse and addiction altogether. The BHS Student handbook outlines the substance abuse policy and consequences for using substances on campus. The consequences include confiscation of the device, academic and extracurricular suspension, and loss of parking privilege. They increase with each offense and with the level of the offense.

Nationally, there is a current push for federal and state regulation of the e-cigarette industry, especially in regards to marketing towards young people. With hospitalizations and fatalities tied to vaping making national news, the public is alarmed and eager to see restrictions placed on vaping products in the near future.

Parents, teachers and healthcare providers are also being called upon to take action. An advisory from the surgeon general’s office urged these groups to educate themselves about the dangers of e-cigarettes and to talk with teens and tweens, about the dangers. Locally, the New Jersey School Boards Association offers a variety of resources for parents and educators on its website at njsba.org.

But preventative measures might not be enough for the thousands of people across the country who are currently addicted to vaping. Resources for teens grappling with a vaping addiction are available at www.teen.smokefree.gov and through the quitSTART app or by texting QUIT to 47848. For more general information about the dangers of vaping, teens can visit therealcost.betobaccofree.hhs.gov or search “the real cost” on YouTube.